Why a Manager Should Say My Circus My Monkeys 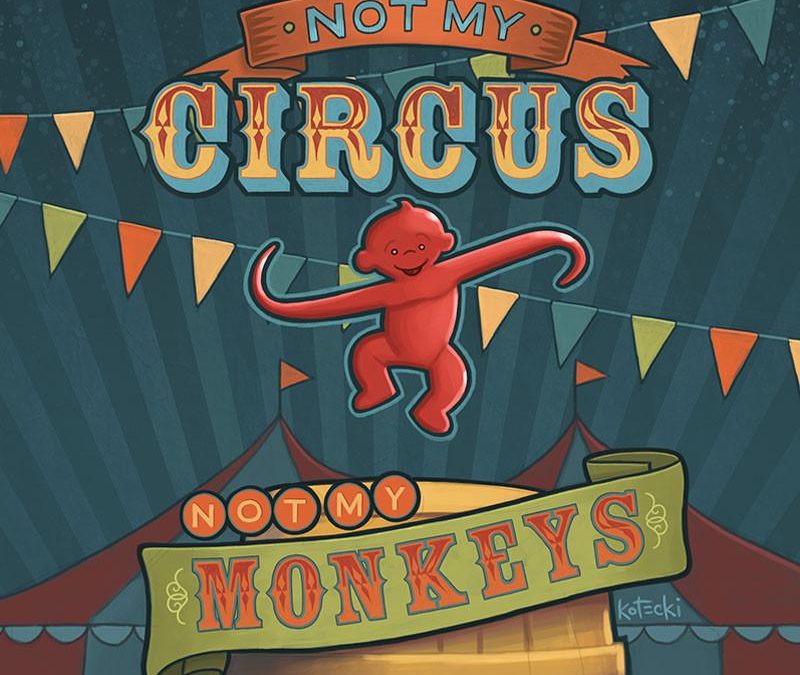 The t-shirt image still makes me giggle. It simply said Not My Circus, Not My Monkeys. That image along with the one of my VP of HR friend’s office covered with stuffed long armed monkeys intended to appear to be flying. When you’re in management, you don’t have the privilege of abandoning the circus you’ve created nor the monkeys you’ve hired, but that means we have to address this delicate issue of responsibility and ownership. Organizations tend to call it accountability perhaps because it sounds nicer to say a leader is lacking that than to say he is simply irresponsible. However, the fact remains that when you lead a team, it’s your circus and your monkeys and you’ve got to own that fact. How do you do that? These three critical steps will help.

You Own the Issues

Even if you didn’t hire that problem person or didn’t pick that persnickety project, you own it. You are the leader, the manager responsible for the outcomes and the one with the job of managing the elements preventing them. If there are barriers you didn’t cause, find ways to build a ramp and ride over them. If there are difficult people behaviors, learn the skills to lead, motivate, set boundaries with, or change the role of that person. You are not always the one at fault, but you are the one responsible. Those two concepts, fault and responsibility, are not synonymous. Even Will Smith has begun coaching that message in his impromptu Facebook messages. Is it because he’s Will Smith that he’s had more than a million views on that message or because there is so much confusion on the difference? You are the manager. You are the leader of a better future, a better solution, or a different path. Lead them to get through it, even if you didn’t cause it. Be the ringmaster.

You Have the Solutions

While it may not always feel like it, managers nearly always have access to more information than a front-line team member. Who can you ask to find a solution to the problem that is creating what you’re calling a circus? Who’s help can you solicit in the corralling of those folks you’re calling monkeys? Your circus. Your monkeys. Your solutions. Now may be the time to get creative. It is always the time to be persistent and it is never a bad time to present multiple options as solutions. For employee problems, this may come in a variety of consequences or a new recognition system. For the process problems, solutions may include suggesting a new way to reach the same outcome as a beta test for which you are willing to take responsibility. For lack of communication, this may be the time for you to appoint a communication liaison or to start sending regular emails to the remote team on upcoming issues. For the lack of vision or budget, sit down and make one or both and then test it and tweak it as time goes on. There is a solution to every issue even when it feels like you’ve tried them all. The key is to own the fact that if you keep at it, eventually you’ll find an act in one of the three rings of your circus, that works.

The Buck Does Stop Here

Or at least it should. Managers should show a high degree of responsibility, accountability and ownership in the outcomes, issues, and opportunities of their team and team members. This is not the same as taking credit for their ideas and acting as if you’re the genius. This is not the same as feeling put upon or overwhelmed at the amount of tasks you’ve taken on. This is also not the same as saying yes to everything or promising you can fix anything without asking a large number of questions beforehand. The buck stopping here means that when you say you’ll do something, you do it. It means when you can’t do something, you’re honest. It means when you are faced with a problem, you make a decision to address it, even if that sometimes means doing nothing at that moment. Leaders are responsible for the team they lead, the span of control they’ve been given, and the outcomes of those team members. Those who dodge this responsibility, blame others incessantly, or blatantly ignore issues thinking they’ll just go away are as annoying and as ineffective as the flagrant use of run on sentences. Take a look at your circus. See the problems that exist. Decide what to do about them and move forward with those solutions or find new ones if you need to. The buck stops here unless you think one of your figurative monkeys is going to jump in and fix things.

Sometimes what we say tongue in cheek has a more sincere meaning than we’re willing to admit. Saying, or donning the t-shirt that says, Not my circus, not my monkeys may really be telling the world you don’t want to deal with the issue or don’t know how to solve the problem. No problem. Seek out more information. A leader doesn’t have the privilege of shirking responsibility because of missing information. A manager doesn’t have the luxury of not managing the issues that face him or her. Your circus. Your monkeys.