Why Assumptions Make More than You Think 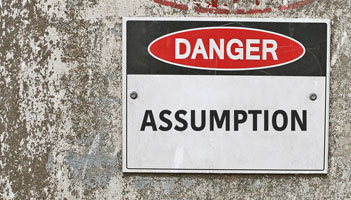 In the course of numerous conversations and coachings this week, a number of assumptions made by those in a leadership capacity have revealed how long term inaccuracies negatively influence leadership. This is an issue that is relatively easy to fix, once, of course, one is aware of doing it. Certainly, you’re no stranger to the statement of “When one assumes, it makes an ass out of you and me”. The challenge is that making assumptions makes many more problems than you might think. What have you assumed lately and would it surprise you to know that it’s having this kind of impact?

When a leader assumes that everything stated in an interview is true, it can create a poor choice in hiring. When a leader assumes the hearsay that has gotten back to them is true, they make poor choices in how to respond to information not yet proven to resemble the truth. When a leader assumes “no news is good news” is a powerful employee development strategy, he or she makes the choice to spend time with only those performing poorly and then is  surprised when top performers quit unexpectedly.  Assumptions, while a way to save time and execute on something rapidly, leave a leader in the dark on making decisions based on accurate data. While no need exists for a leader to analyze the living dickens out of everything they’re told or see, or perceive, a question or two that digs deeper and validate or discount initial insights, has great value.

You’ve not been working long if you’ve not run across the most prevalent organizational focus and concept called employee engagement. Yet, what is this really? Employee engagement is nothing more than creating a workforce who believes someone in that company gives a darn about them and they in turn show that they give a darn about the company. While it could be send in perhaps a more delicate manner, that’s at the heart of it, and so are the hearts of those leaders and employees, as a matter of fact. If a leader assumes they know what motivates or entices each team member, they’ll get it wrong and disengage throngs of team members. If a leader assumes that being paid is enough to engage someone, they’ll create a revolving door of employee turnover. Assumptions are not the only cause of such catastrophic occurrences, but they are what starts many a poor choice, inappropriate reaction, and ineffective program or engagement campaign implementation. Much as the sales and marketing funnel has been flipped upside down to begin with a more customized approach versus one global message to anyone who will listen, the same is true for employee engagement. Find out what they want, like and need, instead of assuming.

As if making poor choices and having a disengaged workforce weren’t enough to thwart one’s leadership efforts, making assumptions creates missed development opportunities for employees, poor communication to employees, misaligned roles and responsibilities, and a team that is generally unhappy. Truthfully, there are both positive and negative assumptions that can create this reality, so as a leader, a worthy goal might be to “trust, then verify” when the assumptions lead toward the positive and then ask more questions when they might create an action that is more damaging. Leaders listen, observe, ask, and test before they allow assumptions to be the basis for their leadership.  What theories or beliefs have you used as a basis for your actions, that might well be theories, beliefs, or assumptions that deserve to be questioned? Is your unapproachable Accounts Payable person really hard to get along with or simply doesn’t know how to connect? Is your completely disorganized new salesperson really going to be a pain the neck or a great way to test out your communication and sales skills in selling HR on finding them a detailed support person to handle the incoming sales workload?

Yes, it’s true, we make assumptions every day on myriad things and in many cases they quite simply keep us safe from having to take the time to gather more data. Yet, when in the role of leader, unless you want to put yourself in a position of having to spend more time and effort in damage control, hiring, recruiting, and removing your proverbial tail from your hind quarters, lessen the assumptions at work, quickly.

I’m Monica Wofford and that’s your Monday Moment. Have great week, an even better Monday, and of course, stay contagious!