The Leader’s Guide to Including Massive Amounts of Diversity 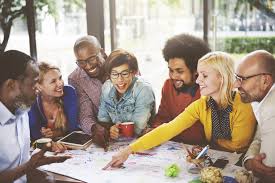 So, your Human Resources department encourages you to be diverse in hiring practices. Your customer fusses at you when your advertising fails to reflect the diversity of your followers. Your team members complain about or resent messages that feel less than inclusive of their needs or preferences. The landscape of diversity and inclusion issues is real and fraught with delicate possible pitfalls, but does it really need to be? We’ve worked with different people always. We’ve hired, employed, and likely led diverse team members always, haven’t we? Perhaps that’s a more personal question and perhaps your answer will determine how much you need this message and the diversity guide and eBook included in today’s Monday Moment. The other challenge? Diversity, and who or what all is considered imperative to include, has expanded. As a leader, you are now faced with knowing these areas and being sure to include them in your daily activities:

When a manager is asked to define or describe diversity, the average answer includes a list of attributes such as race, gender, ethnic groups, age, religion, and sexual orientation. Those items are some of the original diversity categories of focus. However, in recent years, diversity has also come to include citizenship status, country of origin, military service, and mental and physical differences. In today’s climate you also have political affiliation and opinion about any of the afore mentioned groupings, included. Inclusion of these differences is no longer an option. Discussion of just the basics will leave a company or leader in hot water, even if they inadvertently fail to be inclusive with the newer groupings that have gained focus. Companies are investing millions in a wide variety of initiatives to ensure ALL of those they employ, and ALL of their differences are addressed, when this used to be an area driven largely by one or two associations or initiatives, such as the Americans with Disabilities Act. And yet, both the fact that we’ve grown beyond the diversity basics and the fact that organizations are making sizable investments, changes the responsibility you have as a leader to be both diverse and inclusive. No longer are you able to rely only on your knowledge of differences for which you might have a personal frame of reference. No longer are differences, and ways of describing a diverse workforce, obvious and visible to everyone. No longer does a snide remark or even smart aleck comment revealing your own personal beliefs, go unnoticed. Leaders have left the land of basic and moved into territory MUCH more complex.

Diversity in the workplace, in a quick Google search, is still referred to as a brave or bold initiative, though at this point, it really isn’t. Being inclusive and leading a diverse workforce is now expected. The real challenge for most leaders is working it into their daily activities and maintaining it as a focus, particularly in large organizations where multiple departments take responsibility for managing the effort. However, as a leader of a small or large team, a tiny or gargantuan sized company, here are ten ideas to embrace, drive, and encourage inclusion of a workforce that has now become recognized as being massively diversified. (Additional space for more ideas and action planning are found in today’s Moment eBook: The Leaders Guide to Including Massive Amounts of Diversity.)

Source: Linked In Talent Blog with 50+ Ideas for Cultivating Diversity and Inclusion in the Workplace

Let’s face it. We all have our areas of bias and we all have types, groups, or attributes that might bug us. Now is the time to examine what those are and what you might be inadvertently modeling. The sensitivity around inclusivity is fairly high and even those who fail to demonstrate it are now being called names or given labels. That reality aside, it’s time to look at your leadership inclusivity as simply a new skill to practice and master. Whether a teacher leading a group of students, a manager in a start up or long-established office, or a call center team member who answers dozens of calls from diverse customers in an hour, the inclusion of diverse populations is an effort we want all to make, particularly when their lack of it means we or someone we love might be rejected. Consider how you would feel if it were your child being faced with a lack of inclusive thinking. Imagine how you would feel if you worked in a place that never celebrated your favorite holiday. Think about those moments, even while growing up, when you may have been the one that no one wanted to pick to play dodge ball with, instead of against. Silly as it may sound, diversity and inclusion are the primary way to value and respect team members. Focus not just on those who share your viewpoint or way of thinking. Avoid leaving out those who are clearly different, even when their differences bug you incessantly. Be bugged at how hard it is to communicate, not at how they ARE communicating. Or as I’ve said for years, be fascinated at how many different ways there are to approach nearly everything by almost everyone out there on the planet.

A diverse team and including each member of it, is not an easy subject. Making the effort to overcome your own unconscious biases and inadvertent outcomes of your belief systems, might not seem important. And yet, leaders who know that what they do, see, say, and how they behave is contagious, also know that their efforts and focus are worth it.

Each Monday Moment shares a Become a Better Leader Challenge relevant to that week’s topic. This week your mission, should you wish to make rapid improvement ahead of next week’s Monday Moment is this: