When to Stop Being the Boss and Become a Leader 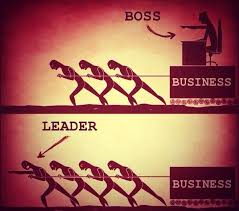 Over the last eleven months, we’ve covered numerous aspects of leadership because leadership is…well, not a one and done behavior. Becoming a boss is an event. It’s a promotion and it happens and then you’re done. You’ve reached that next level position. Becoming a leader is a bit more complex and is based not on a title bestowed, but on a level of influence, the size and scope of followership, and on how much a person embodies what are widely deemed as leadership behaviors. But, defining the concept in those terms can also make leadership feel a lot more elusive. Leadership is achievable, by any personality and every person. There is an element of desire and skills and practice, yes, but there are also three larger areas on which clear focus will have big benefits and speed up your progress in the transition from boss to leader. Let’s look at those three key, general, valuable, vital, areas that should also be in the background as part of your development, even while you’re accomplishing the tasks of that role of boss or manager or director.

Few new leaders have a clear handle on what the heck they’re doing when they’ve just been promoted. We call it promoted, but not prepared. Others call it just scared. However, seriously, who wouldn’t be scared if they’ve been put in a position for which they feel ill prepared. Scared of being found out. Scared of being judged. Scared of being deemed someone that should have remained in their previous position. All are valid and all are easy fears to acquire. The key is to build one’s confidence so that the fear is not what takes over. As you seek to become a leader or strive to simply become a better one, find those areas of skill in which you know you’ve got talent and focus on them. While you build new skills, try new tactics for leading others, and learn more about your role and responsibilities, remind yourself that you were good enough to get promoted. Just because you don’t know all that you need to at this moment, doesn’t mean a decrease in your worth. It means you’re growing and ADDing to what you already knew. As you continue to grow in skills and talents, so should your confidence in how you perform this new role, the new responsibilities and the new boundaries. Your goal is to make sure the confidence you grow and build, is genuine. This isn’t about bravado or fake it until you make it, leadership confidence is about authentically knowing you’re good in some areas, growing in others, and that have what it takes to figure the rest out in the process.

People are different. Not a newsflash worthy sentence. We know employees, bosses, customers, and people in general, are all different. What trips us up in positions of leadership is knowing they’re different and still treating them as if their thinking is similar. We make assumptions. Employees respect their boss and revere their leader, right? Employee do what the boss says or there’s room for an “or else” in that statement, yes? Not always true and just the tip of the iceberg in how employees and bosses see things differently. What about employees from other cultures; differing genders, different backgrounds, different parents and oh yes, different personalities, which are often simplified. Leaders learn the differences of those they have the privilege of leading and then they lead each person slightly differently. They learn the motivations and triggers and avoid the latter. They learn their natural strengths and struggles and support the areas that need it. They learn their preferred environment to chat, coach, or have a meeting and do their best to accommodate for the sake of that employee’s level of comfort. Find a tool or find a person or better yet, work with an expert, who can guide you through just how and how much each of those you lead are different. The results in your awareness will be pretty startling and the results from your shifts in the way you’re leading will be award-worthy.

See Through the Blind Spots

We’re often all too close to our own issues to see them clearly, much less enact action to resolve the issues. Call them blind spots or barriers, the best leaders find a way to see and get through them. Blind spots are those areas that result in you being frequently surprised or even frustrated. Look for those patterns in your daily leadership efforts and when you find them, actively take note and plan to do different in the future. Those patterns you fail to see in how you react or how others react to you or to your actions, can keep a leader with high potential from ever getting promoted. Don’t let that happen. Be vigilant. Be a detective looking for your own blind spots and you’ll become better at leading others. Not only does working on your own build empathy for those others, but it will also help you be less sensitive or susceptible to the next 360 tool utilized in your organization for feedback.

Being a boss is a step, being a leader is a process, and becoming a great leader, for some is a life-long adventure. Your confidence and comfort in your own skin will in large part determine how successful and rapid is your pursuit of leadership momentum. Your ability to learn the differences in others and how they impact your leadership will determine your level of influence. And finally, your interest in seeing through those elements that once seemed invisible or may have kept you blinded, will foreshadow your long-term rate of success in not only your current position but in any company lucky enough to call you their leader. I’m Monica Wofford and that’s your Monday Moment. Have a great week and of course, stay Contagious!